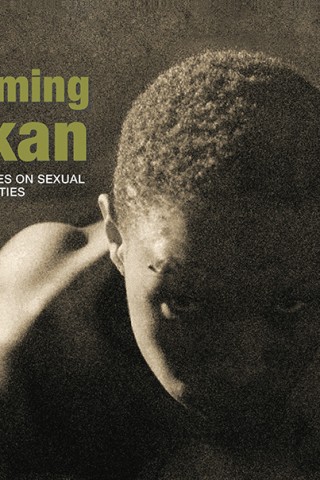 A collection of essays and images, Scholarly archival and critical work.

Reclaiming Afrikan: Queer Perspectives on Sexual and Gender Identities is a collaboration and collection of art, photography and critical essays interrogating the meanings and everyday practices of queer life in Africa today. In Reclaiming Afrikan authors, activists and artists from Nigeria, Uganda, Zambia, Kenya and South Africa offer fresh perspectives on queer life; how gender and sexuality can be understood in Africa as ways of reclaiming identities in the continent. Africa is known to be harsh towards people with non-conforming genders and sexual identities. It is within this framework that Reclaiming Afrikan exists to respond to such violations and to offer alternative ways of thinking and being in the continent. The book appropriates “Afrika” and “queer” to affirm sexual identities that are ordinarily shamed and violated by prejudice and hatred.  The use of “k” in Afrika signals an appropriation of an identity and belonging that is always detached from a “queer” person. “Queer” in this book is understood as an inquiry into the present, as a critical space that pushes the boundaries of what is embraced as normative. The artists and authors included in this text are “queer” themselves and occupy spaces that speak back to hegemony. For many, this position challenges various norms on gender, sexuality, and existence and offers a subversive way of being.

Zethu Matebeni is a Researcher at the Institute for Humanities in Africa (HUMA) at the University of Cape Town. She has worked for many years on issues of sexuality and gender, in particular within the lesbian, gay, bisexual and transgender movement in South Africa and currently Swaziland. Zethu is an activist, academic and documentary filmmaker who has published on queer issues, gender nonconformity, lesbian issues, popular culture, HIV/AIDS and sexual identities.

Tyna Adebowale grew up in Edo state in Nigeria, where she got most of her basic education. Lagos was where she found deeper context and art spaces like the Centre for Contemporary Arts Lagos (CCA) that expands critical representations in the arts. She now lives in Lagos and has started on a creative process to redefine her art practice(s).

Unoma Azuah teaches writing and literature at Lane College in Jackson, TN. USA. Her novels, Sky-high Flames and Edible Bones have won multiple awards including the Urban Spectrum award and the Aidoo-Snyder book award. Additionally, Unoma has been recognized by The Journal of Blacks in Higher Education as well as listed as one of the Top Professors at affordable private small colleges and universities in the US. On Broken Wings: an anthology of best contemporary Nigerian poetry, her latest edited work has just been released.

Dineo seshee Bopape was born in 1981, on a Sunday. If she were Ghanain, her name would be Akosua/Akos for short. During the same year of her birth, the Brixton riots took place; two people were injured when a bomb exploded in a Durban shopping centre; Bobby Sands dies; MTV is launched; the Boeing 767 makes its first airflight; Umkonto we Sizwe performs numerous underground assaults against the apartheid state. Winnie Mandela’s banishment orders are renewed for another 5 years; in the region of her birth, her paternal grandmother dies affected by dementia; that year millions of people cried and billions of people laughed… The world’s population was then apparently at around 4.529 billion… Today Bopape is one amongst 7 billion – occupying multiple adjectives.

Milumbe Haimbe was born in Lusaka, Zambia. She has a Bachelor’s Degree in Architecture attained from the Copperbelt University, and also holds a Master’s Degree in Fine Arts obtained from the Oslo National Academy of the Arts in Norway. Drawing on a background of painting, Milumbe’s current art practices are based in digital illustration, including sequential art as an intermedial process that combines and integrates illustrations and written texts into narratives.
Milumbe asserts that these intermedial concerns are related to intercultural issues, with a focus on the forms of representation of cultural minorities within the context of popular media. She has exhibited her work in numerous shows both locally and internationally, including FOCUS 10 – Art Basal in Switzerland, and is an alumnus of the Art Omi International Artist’s Residency in New York. She has recently been selected to participate in the Biennale for Contemporary African Art in Dakar for 2014.

Jack Halberstam is Professor of American Studies and Ethnicity, Gender Studies and Comparative Literature at the University of Southern California. Halberstam is the author of five books including: Skin Shows: Gothic Horror and the Technology of Monsters (Duke UP, 1995), Female Masculinity (Duke UP, 1998), In A Queer Time and Place (NYU Press, 2005), The Queer Art of Failure (Duke UP, 2011) and Gaga Feminism: Sex, Gender, and the End of Normal (Beacon Press, 2012) and has written articles that have appeared in numerous journals, magazines and collections.

Sibusiso Kheswa is the advocacy coordinator at Gender DynmaiX in Cape Town. S’bu has been working in the South African LGBTI sector since 2002, where he has held positions at Gay and Lesbian Memory in Action (GALA), Forum for the Empowerment of Women (FEW), and the Lesbian and Gay Equality Project. He has worked on various research projects, public education and oral history projects. His works includes co-writing a chapter in a book: Tommy Boys Lesbian Men and Ancestral Wives: Female Same-Sex Practices in Africa. He also codirected Breaking out of the box, a documentary film on black lesbian lives.

Jacqueline Marx is a research psychologist and senior lecturer at Rhodes University and a collaborator in the SARChi Critical Studies in Sexualities and Reproduction research programme. Her recent research deals with the politics of homosexual visibility. It examines the role of race and gender in exacerbating and diminishing homosexual visibility, and considers the circumstances in which invisibility is desirable.

Neo Musangi is a gender non-conforming feminist researcher and performer based at the British Institute in Eastern Africa, Nairobi-Kenya. Their research interests include: War, militarism/ militarization and nationalism, toilet politics and urbanity, gender and body materiality, sexuality and citizenship.

Mphati Mutloane is currently registered as an LLM student at UCT. She holds BA Law and LLB degrees from the University of the Witwatersrand. She specialises in Public law specifically constitutional law and human rights, and the intersection between law and society.

Kelebogile Ntladi was born in Soweto and raised on the East of Johannesburg. Lebo schooled at The College of Cape Town and studied Fine Arts. In 2010 she was involved with Keleketla library, an inter-disciplinary, independent library and media arts organization based in the heart of Johannesburg as a volunteer photographer, which inspired studies in Photography at the Market Photo WorkShop.

Stella Nyanzi is a medical anthropologist based at the Makerere Institute of Social Research (MISR) in Uganda. Her research interests are sexualities, reproductive health, health policy, youths and children, alternative healing therapies, and culture. Stella has research experience in conducting ethnographic fieldwork and qualitative research in Uganda, The Gambia and more recently Tanzania.

Christopher Ouma is a Lecturer at the Department of English at the University of Cape Town. Chris received his doctorate from Wits University where he worked as an Andrew W Mellon mentee at the department of African literature. His research interests and publications revolve around popular culture, the representation of Childhood and its connections to Postcolonial studies and Contemporary or new Diasporic African identities. He lectures and gives seminars on East, West and South African literatures and literatures of African Diaspora.

Jabu Pereira is the Executive Director and founder of Iranti-Org since June 2012. Before founding Iranti-org, Jabu worked at Soul City and the Foundation for Human Rights advocating for the rights of marginalised groups. Jabu has a Masters degree in Museum Studies from New York University and largely uses curatorial space as a form of direct action in using visual art to express social change.

Kylie Thomas teaches and writes about the history and theory of photography; contemporary South African art and visual culture; the history and representation of the HIV/AIDS epidemic; violence during and after apartheid; and about visual activism. Her book, Impossible Mourning: Visuality and HIV/AIDS after apartheid has been published by Bucknell University Press in the United States and is forthcoming with Wits University Press in South Africa in 2014. She edits an interdisciplinary journal of African Studies, Social Dynamics and is part of the editorial
collective of the journal Feminist Africa. She has taught in the Fine Art Department at Rhodes University and is now working in the Department of English at the University of Stellenbosch.

Selogadi Ngwanangwato Mampane describes them-self as a Queer, radical, Africanist, feminist, a human rights activist, academic and artist working towards being a peacebuilder, specifically around issues of sex, gender and race. Selogadi has obtained a BA (Drama) and a BA (Drama and Film) Honours from the University of Pretoria in which their research focused on the representation of ‘Black, femalebodied people’ as a victims of sexual violence, in contemporary South African theatre. Selogadi is currently completing their Masters in Drama at the University of Pretoria, focusing on ‘female-bodied masculinity’.