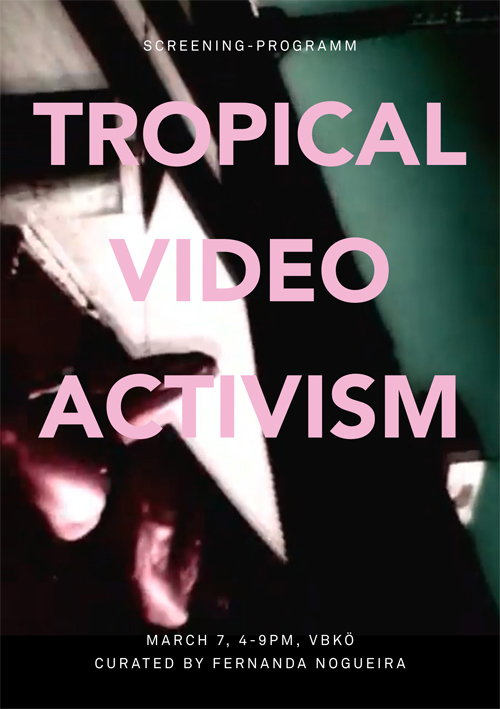 This screening program stems from the urgencies of a collective body, a body formed by fragments, a mutant, which resists any classification, provocative, unsatisfied, which creates new ways of living by acting in the territory of transgression. Tropical Video Activism presents video productions – either registers of actions or more experimental poetics – as signs to make visible, read and spread social transformations, which are in furious excitement in the public sphere in many Southern geographies.

These processes are not happening just in a single territory. We can map the social effervescence, the networks arising and intensifying the emergence and encounter of new transborder communities capable of sharing activist tools and circulating critical information which in the past could only be found in independent, underground and thought marginal networks. Facing the urgency of action and its various potentialities in these different territories, the modern categories such as “originality” or “authenticity” are turned obsolete. In contrast, a broader notion of “network” is strengthen daily in the configuration of a collective battlefield.

These networks are composed by processes of poetic appropriation itself to cause political change (in the urban space and in situations of living together) through direct intervention. Each film shown in Tropical Video Activism works as a “nodal point” in such networks. All of them have that force originated from the body, understood as a creative potential and the most elementary device capable of provoking micro-revolutions and contagion. Its drive and effects have no clear or expected territory, and precisely because they are de-territorialized they cannot be refrained.

If around the 70s in Latin America and elsewhere there was a clear political positioning reflected in the subversion of video as a language, today that same language is transformed by the possibility of wide access to production, edition and distribution. Video and artistic practice are associated here to trace the political as an aspect of their own poetics reaching a sensible dimension and thus inciting new processes of subjetivation to cause new singularities and side critical effects.

The collective body of production presented here in a limited format does not expect only to raise awareness; neither does it seek to militate for any type of representation through traditional political forms or mass media. Its micro political actions do not intend to respond to the functional requests of an economic or political system: they embody the desire of transforming for now, the craving to provoke changes in the present, the curiosity of exploring new sensibilities in the artistic practices, of using the camera and the moving image as a tool to disseminate the effects of those actions and their possibilities of contagion.

The sessions Transformative Illegalities and Post-Porning Genders call to reflect on these practices in a decentralized geography. If in Brazil the known expression “only cannibalism unites us” of the Modernist movement (1922) has been defended, here we could look around and propose “only tropicality unites us” in a very incoherent mode. The notion of “tropical”, which could point out the belonging to certain regions of Latin America, works here as a counter-concept capable of deconstructing the margins of this “odd/other”. It connects different forms of resistance, activation and intervention in the collective imagination claiming to take into account common combative “ways of doing” that cross artistic practices and/or activists and/or militants, which thus enable us to gather these different initiatives.

There is no intention to reaffirm an ethos linked to the idea of nation-state, or a homogenized Latin American identity, but to link movements and active communities that go beyond the generational sense, or evolution of the arts and technology, or the relation of recognizable names within a hegemonic history of (video)art. In this sense, the program aims to softly interfere in some literally ignorant binary western paradigms of perception (i.e. space-time, male-female, own-alien, epistemologically valid – invisible, etc.).

There is a complete interdependence between the blocks and the videos through which is possible to understand the connections between social segregation, racism, the legacy of slavery, colonialism and how the relegated dissenting memory and practices are able to face the normative systems, expose them in alliance to queer/cuir/kúia sexual poetics and politics today. The titles and subtitles of the sessions, the sequence of videos and their connections are intended to provoke, to de-categorize and establish reflection from performative assertions, break open the conservative mindset and bring urgent issues for collective debate.

Finally, this program aims to concentrate and reintroduce in the field of visibility bodies, practices, sexualities and ways-of-living (and surviving), which have been deliberately subtracted from the public view as a strategy to eliminate their existence from the common imagery for homogenous construction of a supposedly “public” space built upon false consensus in a capitalized scene.

TROPICAL VIDEO ACTIVISM
All videos are subtitled into German.

The first part of this program presents key video-graphic productions which embody, in many ways, the cyclical problems generated by the disastrous legacy of expropriation, disposition and flow of Capital and crisis since the Colonization started. The artistic proposals recreated or registered on video are not only aimed to present a critical point of view of the situation in Brazil and, by extension, other similar contexts, but also to transform the relationships and activate the social memory, to practice street micro-revolutions and to scatter survival and collective building tactics.

The selected videos in this second block seek to introduce a set of visual messages that can expand the political field to our guts. The session shows the war on the bodily territory that overpass its boarders, disrupt imposed orders, expurgate and vomit the corrupt education received as an obligation, read where we are and what we want, empower the body and carefully destroy the sex-political normative regime.

This screening program was previously presented at Fundació Antoni Tàpies (Barcelona) as part of the Loop Festival of video art in May 2013.

The screening program will be presented by Fer Nogueira in conversation with discussants and the audience from 7:30 pm.

Fernanda Nogueira (São Paulo/Vienna) is a researcher, art historian and literary critic, working on translation in broad terms. S/he is currently developing his doctoral research in Art Theory and Cultural Studies at the PhD-in-practice program of the Academy of Fine Arts Vienna. And since 2008 s/he integrates the Red Conceptualismos del Sur [Southern Conceptualisms Network], a critical platform for activation of latin american artistic and political memory.

Daniela Paredes (Quito/Vienna) has been recipient of scholarships that allowed her to experience life (and being “other”) in Ecuador, USA and Indonesia. She has worked on the intersection between education and culture, focusing on an inter/cross-cultural dialogue, as well as ethnographic research in cultural heritage. In Vienna she pursues a Master’s Degree in Social and Cultural Anthropology working on transnationalism, migration, and gender division of labor.

Hong-Kai Wang (Huwei, Taiwan/ Vienna) is an artist and researcher. She is a PhD in Practice candidate and is part of the Spaces of Commoning research project at the Academy of Fine Arts Vienna. She works with listening to instigate social organization through long-running conversations and patient collaborative labor. Presenting her work internationally, her ongoing research is concerned with writing of history, sugar economy, social transgression, etc.

Imayna Cáceres (Lima/Vienna) is a researcher, artist and sociologist. Her activist and artistic work focus on the analysis of migration control in Europe, and the exclusionary measures on which it is based, as well as on the role of the colonial difference in the construction of subaltern otherness. Her practice lies between arts, politics, affects, through coordinated action and the development of collective strategies of resistance.

Julia Hacker (Buenos Aires/Vienna) studied Edition at the Faculty of Arts at the University of Buenos Aires. She worked for ten years as a proofreader, editor and press and communications officer in various independent publishers and newspapers. She is currently living in Austria.

Luisa Lobo (Belo Horizonte/Vienna) is pedagogue and youth coach at the association MAIZ. She is a current MA student at the Department of Social and Cultural Anthropology of the University of Vienna. Her research focuses on transnational migration and migrant activism.

Mónica Chávez (Mexico/Austria) is youth leader, dance teacher, coach and trainer in personal defense “Drehungen” method. From an early age she has been committed to the causes of women, especially those related to domestic violence and sexual orientation in Mexico. She currently develops her feminist work with girls and young women, and she is sensitive to linguistic racism in Austria.

Pedro Costa (Natal/Berlin) is a Brazilian artist and performer. His/her main artistic project ”Solange, tô aberta!” [Solange, I’m open!] consists of a Baile Funk show: it uses Carioca funk sound (originally from the favelas of Rio de Janeiro) as a tool for political resistance blending queer, gender performativity and post-porn to create a celebration, an explosion of cathartic dance and politics, questioning sexuality, gender, identity and stereotypes. An invitation for those bodies desiring openness and space to exist. Pedro has been living in Berlin for the last four years.

Sandra Monterroso (Guatemala City/Vienna) is an artist, designer and professor. She is PhD-in-practice candidate at the Academy of Fine Arts Vienna. Her Master’s Degree was focused in Design Process, at The Autonomous Popular University of Puebla, Mexico. She also studied Graphic Design in Guatemala and Philosophy for Peace studies in Spain. Her artistic work has been presented in several individual and international collective exhibitions, and she has been awarded with many prizes and grants.

Verena Melgarejo Weinandt (Berlin/Vienna) grew up in Berlin and lived in Bolivia and Argentina. She studied Photography and is currently studying Fine Arts and Sciences of Culture at the Academy of Fine Arts Vienna. She has been working in several projects, institutions and collectives dedicated to various topics such as migration, feminism, sexism, racism, anti-Semitism and colonial continuities in Austria/Europe. Her artistic work is mostly performance and intervention in public space.

A special and kind thanks to all artists*, activists*, militants*, social and cultural agents* for the courtesy that made possible this screening program!