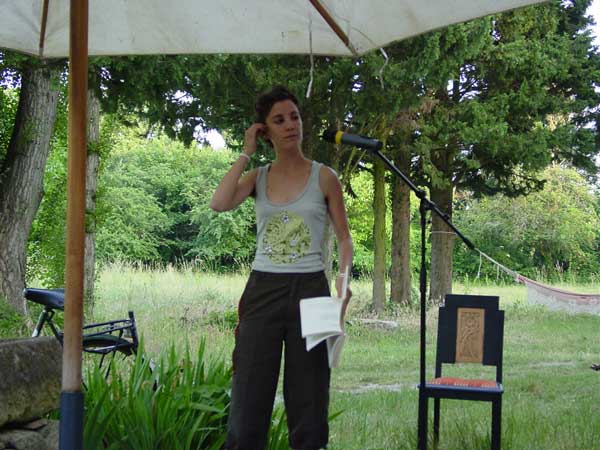 The documentary-alternative film “Fireflies (Lucioles)” is part of a European Commission project called “Lesmigras” (migrant lesbians), whose objectives are to fight racism, sexism and homophobia inside the European space that started in 2001 and closed in 2004. As the producer and the director of the movie, I choose to show the portrait of four lesbians “of color” in France, from different backgrounds and plural identities, as they move through their own processes of refusing and leaving behind their assigned status as victim of history. The four lesbians are positioned as subjects of colonialism, migration due to war and hunger, and persecution in France due to racism, sexism, and lesbophobia. Through interviews and evocations of the poetics of their lives, the film tracks their movements towards pride in becoming the subjects of their own “herstories”. The film opens a space for understanding the lives of lesbians from France’s ex-colonies, and from mixed and radical backgrounds. The film evokes the dynamics of exile and feeling at home inside themselves. It deals with the lesbians’ modalities of resistance to the paternalism and maternalism of dominant gay and lesbian institutions in France. In the film, the lesbian subjects speak in their own words about our political, cultural and emotional situation. The film is both political and poetic.

For me, politics are very poetic and poetry is politics when we care about ethics in the process of creation. The film has been shown for a two years tour in lots of cities throughout Europe (more than 50) and just was bought by the University of Berkeley. “Pains we whisper for fear of heavy waking, / and bursts of laughter to cover the unspeakable; / Exile of exiles: women invisible in their own country / veiling itself with shame at the sound of infamy. / Refusing the other in precise terms, / we call these racism, sexism, homophobia, / prowling everywhere in the land of France / like armed ghosts destroying life. / Responses pour forth. No resignation, / no submission, no fatalities. / Rumbling anger, opening the way to laughter, to songs of freedom. / Stories telling the pride of being / after long journeys in mixed skin, / be it yellow or black, dark or off-white, / adorned with the rainbow, drunk with dignity, / four women, dressed in emotion / will play this music, in singular harmony. / By the ﬂames of ﬁreﬂies shall we be lit.”