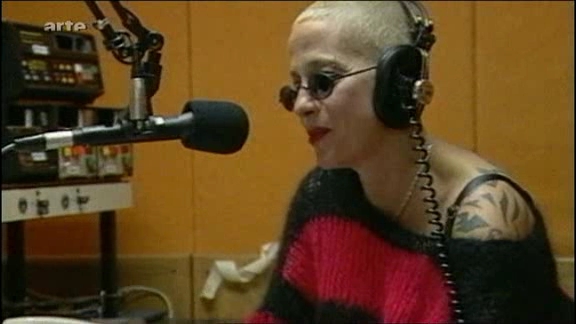 A multi-layered work featuring animation, archival footage and interviews with the likes of William Burroughs, Carolee Schneemann and Richard Hell, Who’s Afraid of Kathy Acker by Austrian artist Barbara Caspar and co-produced by Annette Pisacane (Nico Icon) and Markus Fischer, is a thoughtful and creative film biography/essay on the late outlaw writer and punk icon, whose formally inventive novels, published from the ’70s through the mid-’90s, challenged assumptions about gender roles, sexuality, and the literary canon.

A beguiling and intensely contradictory figure, Acker is best known for books which creatively appropriated texts from Great White Male writers, retelling them in an emotionally raw, sexually blunt, and politically questioning female voice. With her conceptual art videos in the ’70s, her close-cropped dyed blond hair, her tattoos, and her piercings, Acker was a performance artist, proto riot grrl, and living link to the transgressive authors of the ’50s and ’60s US and French experimental fiction scenes. Caspar has made a film that captures the essence of both Acker the writer and Acker the person while celebrating the avant-garde legacy of an artist who forever expanded the limits of self-expression.

*Barbara Caspar (1979, Graz) After a year of studying photography in London, Caspar studied philosophy and psychology at the University of Vienna between 1998 and 2002. At the same time she was also studying multimedia art at the University of Applied Arts in Vienna, and painting and conceptual art at the Viennese Academy of Fine Arts. In 2003-2006 she completed her doctoral studies in Vienna and Paris, and in 2003 she also completed a one-year course of study in film with Michael Haneke in Vienna. In later years she lived and worked in Vienna and New York, and exhibited her paintings in Europe and the US. She has spent the last three years working on her debut, Who’s Afraid of Kathy Acker?