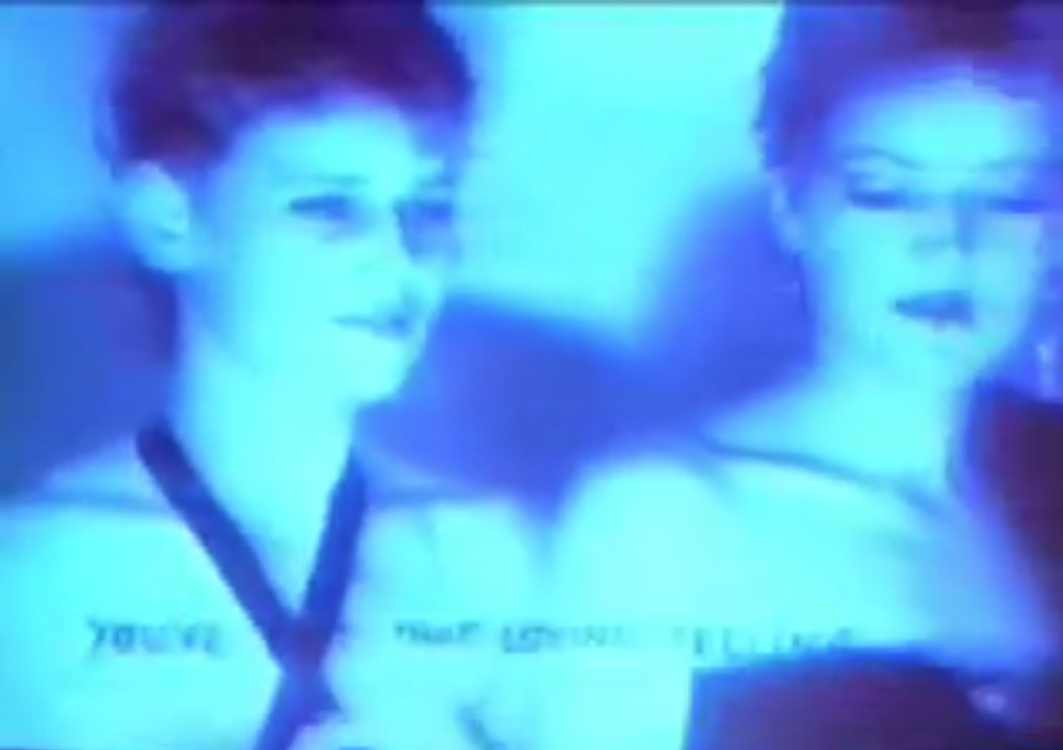 With the song by Yello “Pin ball cha cha” and the singer that invites us to watch by singing “Come, come closer to me, I tell you man you will see…” we enter in the dance performed by Marina Grzinic. The public is in relation to the dance as in a peep show, implying a pornographic camera eye but as well a certain cannibalisation/pornographic perpetuation of our lives by the law and mass media that from 1980s will transform the paradigm of society and discipline into society and control. Therefore we have a duplication of roles, Marina Grzinic and Aina Smid in front of the camera as in some kind of cinema verite (talking about their sexual lives and lesbian attitudes) and Grzinic/ Smid on the TV behind them as a night show. The music on the TV’s program (a TV within a TV, as a vortex of mass media and show business that will take control onto our lives) we hear the song by the punk group Racija v kliniki Mercator (the singers were Grzinic and Smid), and as well we can read the subtitles on the TV as Take I’m Yours; D’ya think I ‘m sexy; You Lost Your Loving Feeling. The last part of the video opens with a subtitle/full screen text Capital punishment, following by a dialogue of the actresses/performs in the bathroom. They exchange thoughts about a construct police case in Ljubljana in the 1980s in relation to punk fanzines, writing graffiti on the streets and the imprisonment of some punks being declared as nazi punks in socialism.
–
Video made under the name of the group Meje kontrole st. 4// The Borders of Control no.4 (members Grzinic, Smid, Dusan Mandic and Barbara Borcic)
–
VHS, colour, 11.08 min;
produced by SKUC-Forum, Ljubljana, 1983
Original title: GROŽNJA PRIHODNOSTI
Actresses/performers: Marina Grzinic and Aina Smid
Camera,editing: Dusan Mandic
Music: Yello “Pin ball cha cha” and demo recordings of music and lyrics from the first female punk band group in Yugoslavia Racija v kliniki Mercator (1980) song “Se vkljucujem, nisem to hotela povedat”/I am taking part in the group; I did not want to say this…”
Language: Slovenian; subtitles: English
–
*Marina Gržinić is one of the major contemporary theoretical and critical figure in Slovenia.Since 1993 she is employed at the Institute of Philosophy at the Scientific and Research Center of the Slovenian Academy of Science and Arts (short ZRC-SAZU in Slovenian and SRC-SASA in English). Today she holds a position of professor and research adviser. For her scientific work she has received the Golden SASA sign in 2007.She is as well Full Professor at the Academy of Fine Arts in Vienna, Austria from 2003. She publishes extensively, lectures worldwide and is involved in video art from 1982.
–
*Aina Smid is an art historian and artist.