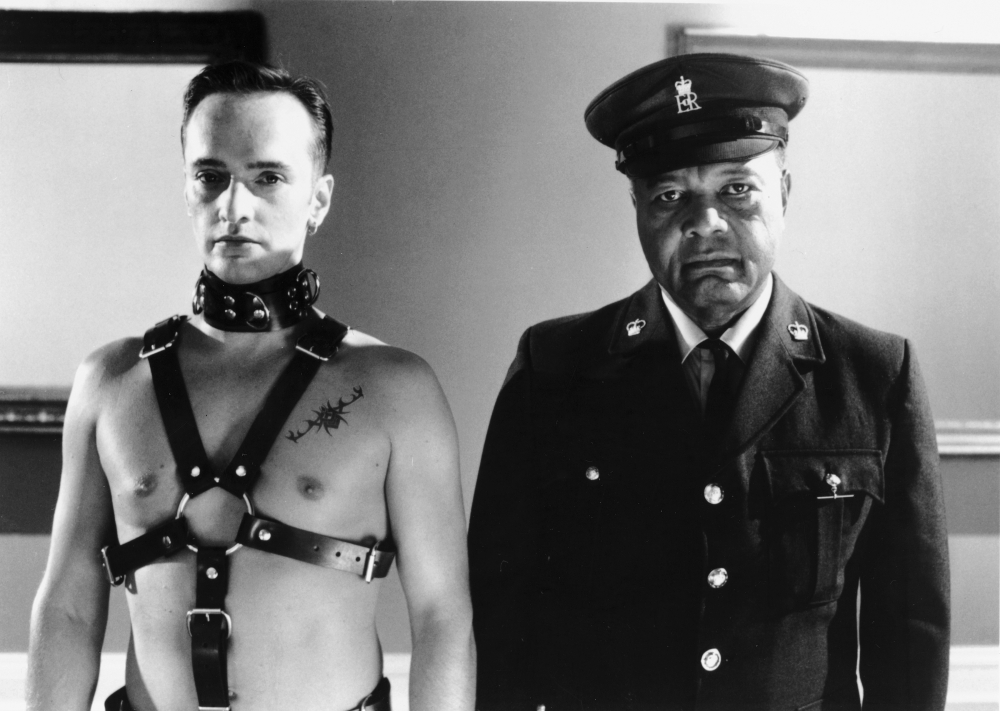 The Attendant (1993) is actually set in a museum: Wilberforce House in Hull, England, which is devoted to the history of slavery. It’s a real place, though in Mr. Julien’s hands it looks surreal.

The plot revolves around sexual fantasies aroused in a middle-aged black male museum guard — or attendant — by a young white male visitor. Much of the action takes place after closing time. As the guard paces the galleries, a huge 19th-century painting titled “Slaves on the West Coast of Africa”, by the French artist François-Auguste Biard, comes to life, its melodramatic scene of a white master bending over a dying black slave transformed into an up-to-date, leather clad sadomasochistic grouping.

The film is only 10 minutes long, but it packs in a rich variety of images and moods. They include some funky camp humour (gold-lamé bar-boy; mosquito-size Cupids), a complex sexual and racial dynamic of dominance and submission and a poignant sense of loss, which serves as a reminder that the piece was made at the height of the AIDS epidemic. (Holland Cotter, The New York Times (24 November 2006))

*Isaac Julien was born in 1960 in London, where he currently lives and works. While studying painting and fine art film at St Martin’s School of Art from which he graduated in 1984, Isaac Julien co-founded ‘Sankofa Film and Video Collective’ in which he was active from 1983–1992. He was also a founding member of Normal Films in 1991.

Julien was nominated for the Turner Prize in 2001 for his films The Long Road to Mazatlán (1999), made in collaboration with Javier de Frutos and Vagabondia (2000), choreographed by Javier de Frutos. Earlier works include Frantz Fanon: Black Skin, White Mask (1996), Young Soul Rebels (1991) which was awarded the Semaine de la Critique Prize at the Cannes Film Festival the same year, and the acclaimed poetic documentary Looking for Langston (1989), which also won several international awards.

Isaac Julien was visiting lecturer at Harvard University’s Schools of Afro-American and Visual Environmental Studies between 1998 and 2002. He was also a research fellow at Goldsmiths College, University of London (2000-2005), and is currently both faculty member at the Whitney Museum of American Arts and Professor of Media Art at Staatliche Hoscschule fur Gestaltung Karlsruhe, Germany. He was the recipient of the Performa Award (2008), the prestigious MIT Eugene McDermott Award in the Arts (2001) and the Frameline Lifetime Achievement Award (2002). His work Paradise Omeros was presented as part of Documenta XI in Kassel (2002). In 2003 he won the Grand Jury Prize at the Kunstfilm Biennale in Cologne for his single screen version of Baltimore; in 2008, he received a Special Teddy for his film that he collaborated on with Tilda Swinton, on Derek Jarman, called Derek, at the Berlin International Film Festival.

Julien has had solo shows at the Pompidou Centre in Paris (2005), MOCA Miami (2005), Kestnergesellschaft, Hanover (2006), the Museu Nacional de Arte Contemporânea – Museu do Chiado, Lisbon, Portugal (2009), Museum Brandhorst, Munich (2011) and most recently at SESC Pompeia in Brazil (2012). His film Ten Thousand Waves (2010) went on world tour, and has been on display in over 15 countries so far, and which will conclude at the Museum of Modern Art, New York in 2013/14. Julien is represented in both public and private collections including the Museum of Modern Art, New York; Tate Modern; Centre Pompidou; Guggenheim Collection; Hirshhorn Collection, Albright-Knox; the Irish Museum of Modern Art; the National Museum of Norway; Brandhorst Collection; Fundación Helga de Alvear, Madrid; Goetz Collection; the Louis Vuitton Art Foundation; LUMA Foundation; and the Zeitz Foundation.