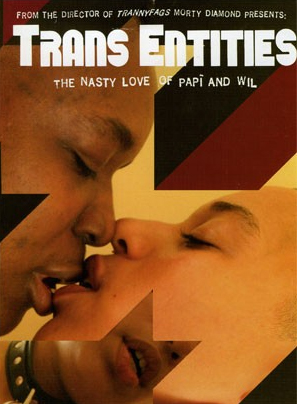 *Morty Diamond is a Jewish transsexual writer/ artist/ filmmaker currently living and working in Los Angeles. Morty has edited two anthologies showcasing the trans experience from the perspective of transgender writers: From the Inside Out (Manic D Press) and the forthcoming Trans/Love (Manic D Press). Diamond also uses performance art to make gender and trans bodies visible in public spaces. Past pieces include “My Year In Pink,” in which he wore head to toe pink everyday for a full year and “Ask A Tranny,” where he allowed strangers to ask him questions about transsexuality while sitting at a booth set up in Time Square. He recently performed “Tranny Ramble Tamble” at PS1 in NYC. Perhaps his best known work is the film he produced and directed, Trans Entities. This eye-opening erotic documentary follows a real life trans couple as they explore the intersection between their gender and sexuality. Morty is currently working with trans artist Cooper Lee Bombardier on publishing the first literary and arts magazine focused on the transgender and transsexual community.