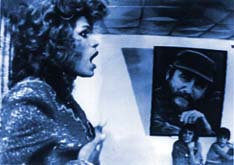 After the Revolution, gays were not respected in Cuba, but in the small Havana neighborhood of La Güinera, a few courageous women came to power and encouraged the gay community. Glamorous gowns fashioned from grain sacks and eyelashes made out of carbon paper are the reality of drag in Cuba. In La Güinera, gay transvestite performers have earned respect and status through creative work for the neighbourhood. On stage action and backstage preparation opens out into insightful interviews with community leaders, families, and the performers themselves.

*Margaret Gilpin –  From 1970 to the 1990s, she was president of U.S.-Cuba Health Exchange (U.S.C.H.E.), which spearheaded medical and scientific interchange between Cuba and the U.S.  She authored many articles about the Cuban health-care system and seminal articles about the Cuban family-medicine program.  In the ’90s, she turned to documentary film making. Her best-known documentary, “Mariposas en el Andamio/Buttterflies on the Scaffold,” (1996) looks at drag and being gay in Cuba.

*Luis Felipe Bernaza (1940-2001), born in Santiago de Cuba. When he was sixteen he joined 26th of July Movement, led by Fidel Castro. After Castro came to power, he began working at the Cuban Institute of  Cinematographic Art and Industry (ICAIC), where he was working as a production assistant before being sent to study at the Higher Institute of Cinema in Moscow (1963-1967). Later, as a director of ICAIC, Bernaza had a long career as a documentary filmmaker producing El piropo (1978), El señor del cornetín: Arturo Sandoval (1982) and Hasta la Reina Isabel baila el danzón (1991). He as well directed feature films, De tal Pedro tal astilla (1985) and Vals de La Habana Vieja (1989). In 1994 he declared himself as independent artist and filmed Estado del tiempo, a documentary on the rafter crisis and afterwards also made Butterflies on the Scaffold (1996) in collaboration with the Margaret Gilpin.