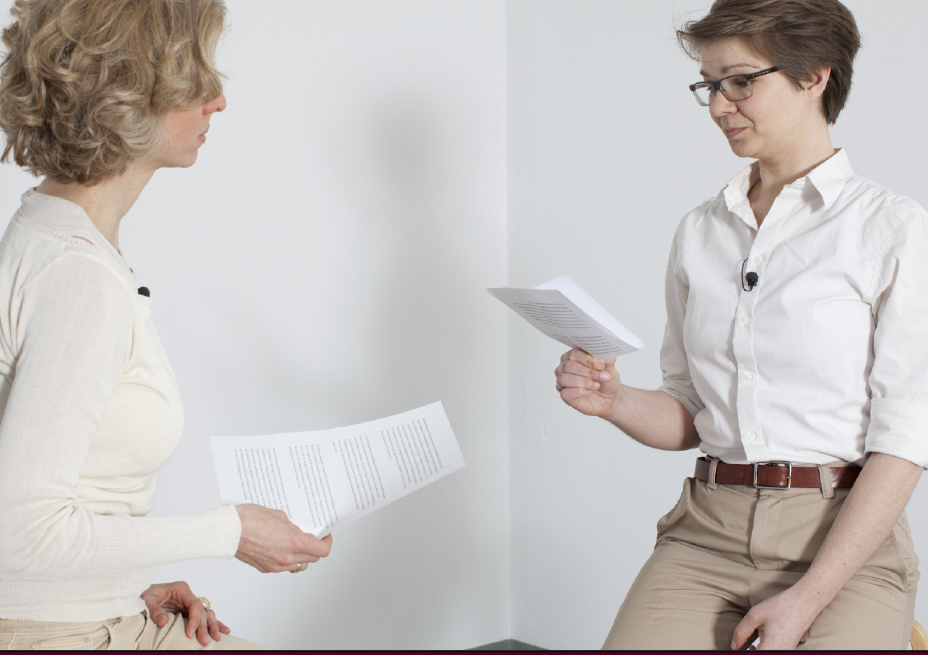 After the Transformation, shifts our notions of transformation. Hoffner places the event of her video work precisely not in Eastern Europe after 1989, but dresses first of all a different transformation, the changes of voice and body in the discursive field “transgender”. The reduced setting, a voice training between a trainer and a client/patient gets soon highly complex. Hoffner uses the separation of voice and body, image and sound, the unclear and complicated speaking positions in the text, as well as several layers of time to confront the audience with various questions-about their images of gender, the interest of state and medical institutions on gender identity, the relation between service and consumption and the possibility to change one’s own gender identity. In the end, surprisingly and almost as a side track of the story, another questions appears, a question about the relation of gender transformation and transformation after 1989. This framing allows Hoffner to evoke images which are usually not contorted with Eastern European history. The queering intervention in memory happens in this work first of all through the surprising and strategically placed desire for a “time after the transformation”, which leaves institutional norms and norms of remembrance beind it. Furthermore, Hoffner suggests with her work to use forgetting and repression of painful events as subversive tactics, which are carefully differentiated from exclusion and repression of specific memories.(Renate Lorenz)

*Ana Hoffner is an artist, theoretician, performer and mentor based in Vienna. Hoffner understands the artistic field as a place of critical knowledge production, mainly with an interest in Queer Theory, Performance Studies and Visual Cultural Studies. Hoffner’s work questions persistently both production and presentation, research methods as well as the communication of (arts-based) research results through a performative artistic and theoretical practice as well as video, photography and installation. She* has finished the PhD in Practice Program at the Academy of Fine Arts Vienna in 2014.