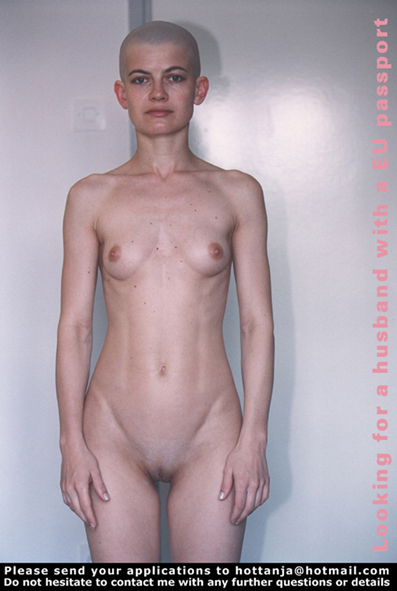 “In August 2000 I started “Looking for a Husband with EU Passport” project: www.cac.org.mk/capital/ostojic. After publishing an ad with this title, I exchanged over 500 letters with numerous applicants from around the world. After a correspondence of six months with a German man Klemens G. I arranged our first meeting as a public performance in the field in front of the Museum of Contemporary Art in Belgrade, 2001. One month later we officially married in New Belgrade. With the international marriage certificate and other required documents I applied for a visa. After two months I got one entrance family unification visa for Germany, limited to three months, so I moved to Düsseldorf where I was officially living for three and a half years. In spring 2005 my three-year permit expired, and instead of granting me a permanent residence permit, the authorities granted me only a two-year visa. After that K. G. and I got divorced, and on the occasion of my “Integration Project Office” installation opening in Gallery 35 in Berlin (July 1, 2005), I organized the “Divorce Party.”

Processes of embodiment at borders: Tanja Ostojic and the minimal difference (M.Grzinic) >>

Looking for the meaning of “decolonial gesture” (W.Mignolo) >>

*Tanja Ostojic (1972, Yugoslavia) is an artist and cultural activist based in Berlin. She has been active in the art scene in the former Yugoslavia since 1994 and internationally since 1997. Ostojic includes herself as a character in situationist performances and uses diverse media in artistic research, thereby examining social configurations and relations of power. She works from the migrant woman’s perspective and the approach in her works is predominantly defined by political and feminist position, humor and integration of the recipient.